“The common theme across the services and the United States’ nuclear enterprise is one of force degradation resulting from many years of underinvestment, poor execution of modernization programs, and the negative effects of budget sequestration (cuts in funding) on readiness and capacity.”

– Heritage 2016 Index of US Military Strength

Of the many daunting and persistent challenges to our nation’s military, few are more complex or important than maintaining readiness of our forces.

I spent six tours in Washington, DC and five in the Pentagon. I witnessed the unending struggle to balance current and future readiness. I saw symptoms of the poor health of our military forces such as:

Recently, Secretary of Defense Ashton Carter stated, “Budgets often require trade-offs...Where trade-offs among force structure, modernization, and readiness posture needed to be made, we generally pushed to favor the latter two. This is important, because our military has to have the agility and ability to win not only the wars that could happen today, but also the wars that could happen in the future[1].”

The problem is we are not good at predicting when we have to be prepared for what type of fight.

What Type of Fighting, and When?

There are many facets to consider, but let’s focus on two fundamental questions that each stakeholder has to sort out:

High-end warfighting means preparing for a capable adversary who has state-of-the-art equipment and the skill to use it. Think of the Defense Department’s focus on the “Third Offset.”

Low-end warfighting speaks to here-and-now daily threats from enemies such as ISIS or Al Qaeda. It’s about sending people as fast as we can. Low-end also includes humanitarian operations. Think of how many times the military performed rescue missions after natural disasters or set up military hospitals to help arrest an epidemic.

The other factor in military readiness is time to deployment. What deploys now, and what do we hold back so resources can recover or improve? There will always be pressure to deploy everything we have—for decisive wins and fast relief.

Let me illustrate this with a simple example. Let’s say your house is on fire. Unfortunately, the city could not afford having on-call firefighters or equipment. The day you call 911, they start building the fire truck and training the firemen. This answer is totally unacceptable, right? You want the truck rolling down the road with a fully trained, totally equipped and rested crew.

Who Are the Stakeholders in Military Readiness?

All have the same overall goal–to defend our land and interests. However, everyone has a different view on the best way to get there.

Strategic thinking and solid analysis is critical to developing a more ready force in a sustainable fashion. LMI helps build and enhance the readiness of the Joint Force in many areas: 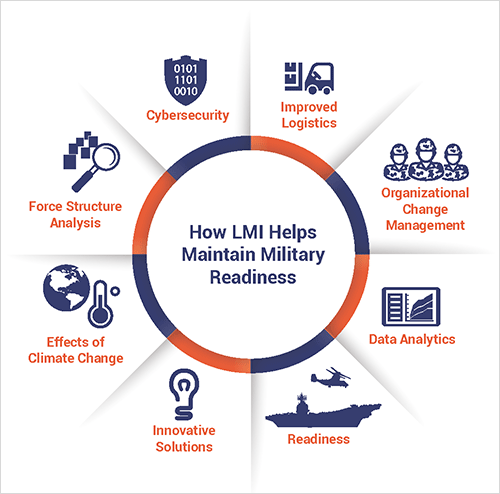 The bottom line is to find common agendas amongst these protagonists. It’s about building greater trust and a shared culture. It means developing a shared view of the risk versus benefit (reward) from taking each course of action.